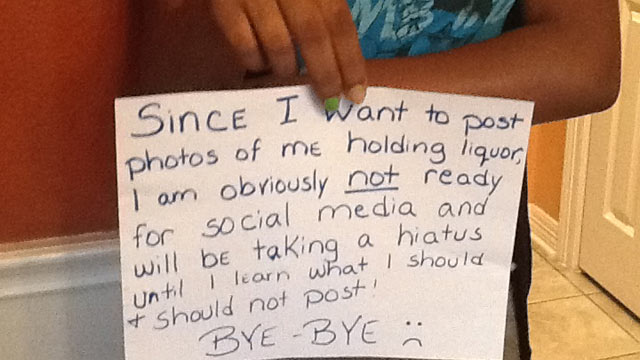 I came across an article the other day that just had me flabbergasted. The story was of a mother in Texas that in essence banned her daughter from Facebook and other social media outlets after she had shared a photo via Instagram that were questionable of the type of daughter that she apparently pursued or wanted to be.

The daughter had posted a photo of her holding an unopened bottle of vodka on Facebook with the status of “I sure wish I could drink this”.

Did the daughter actually do anything illegal? No, not at all. Could she have used better judgment? Absolutely, because just like the mother shared in the article, there are risks for behavior even if it’s not illegal and those risks need to be understood and appreciated.

“I thought she knew better, but in her mind, she thought, ‘I’m not drinking, what’s the problem?'” Billingsley said. What the girl didn’t realize, she said, was that the photo might still send the wrong message to a future employer or prove attractive to a predator, who “can see it and think this is a little girl who likes to drink.” 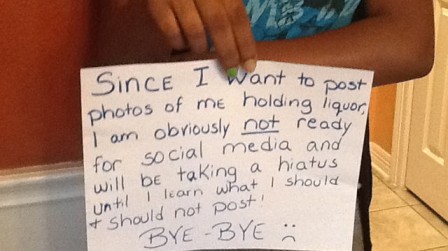 The other thing that absolutely shocks me is the response from the media and others saying that the mother was being too harsh and shouldn’t have publicly embarrassed her daughter by posting the image below on her Facebook account.

The daughter apparently begged her mother to just give her a spanking instead of making her pose for the photo and having it posted.

Of course she did! She’s a smart girl, she knows the spanking would have just been painful momentarily and would have been over and not shared with anyone else. She realized by having the photo published by her mom instead would be seen by all of her friends and family (and now the entire national media). I’ll bet she’ll remember this lesson for more clearly than she would have remembered the spanking right?

If changing people’s behavior is best done by them being embarrassed about their own bad decisions and behaviors being made public, then perhaps a little more public embarrassment is in order. The odd thing for me is that people don’t realize or seem to care that their bad behavior is already being seen by everyone in the first place. Perhaps those of us who see the bad behavior and decide to ignore it or not point it out should change our own response. When we see someone being stupid and making bad judgment, perhaps we should call them out on it right when we see it in a much more public fashion. Maybe then we’d all start thinking a little more before acting, at least in public.

Oh, and one more thing. As the title of this post kind of poked at, your child having access to Facebook, Twitter, a smart phone and any other of today’s current “perks” of technology is NOT THEIR RIGHT! It is a PRIVILEGE! Keep that in mind before you decide to “reward” them by giving them access to something. It’s obviously much harder to take away than to withhold in the first place.

My son is 12 and he now has a cell phone and an iPod touch. He’s on Instagram just like this lady’s daughter. He doesn’t have a Facebook account because for at least one reason, the minimum age for a Facebook account is 13. Parents I want to remind you of that. If you’re child isn’t actually old enough to fulfill the Terms of Service agreement and you let them create an account anyway, what message are you already sending to your child?

It’s not a RIGHT! It’s a PRIVILEGE!